In the 1980’s the Meridian office complex and golf club was beginning to take shape. Bounded by I25 to the west and Lincoln Ave to the south (E470 to the north was not built yet) the area was to become a gently landscaped area for thousands of people to work to the south of the bustling Denver metro area.

As a part of that development, Lincoln Ave would be converted from a narrow two-lane road to a four-lane boulevard built with shining concrete pavement. For decades this roadway experienced the growth of the area around Lone Tree, Centennial, Parker and Highlands Ranch with ever increasing levels of traffic. Inevitably the roadway was in need of repair.

In 2018 after several smaller patch type repair jobs, the City of Lone Tree decided it was time to do a more significant project to remove and replace some of the time tested but well-worn concrete pavement. To that end the City let the 2018 Lincoln Avenue Panel Replacement Project in January of that year.

The project was put out to bid and each contractor was asked to submit their schedule and phasing plan with their bid. The project consisted of saw cutting, removing and replacing 3,500 sy of concrete pavement in various locations and widths over the approximately one mile long roadway. The real challenge to the project was to how to go into the existing roadway that carries a tremendous amount of traffic and repair the pavement in a safe and expeditious way.

CRCC was considered the low bidder on the project and developed a plan to do just that. Our proposal to the City was to move the westbound traffic (where the repairs were required) into a head to head configuration in the existing eastbound lane. This was considered an inconvenience to the traveling public so part of CRCC’s plan was to accomplish all of the work in one weekend. While the City was skeptical if that could actually be pulled off they agreed to give it a try and CRCC went to work.

The work began with saw cutting the existing pavement and then on a Friday night two excavators went to work removing the pavement in separate areas. With experienced CRCC crews on the work it went quite well and after a good start on the removals CRCC fine grade crews began. It was a requirement that 30” deformed tie bars be drilled and epoxied into the edges of the existing pavement around the perimeter of the removals. This was accomplished with multiple crews and drills starting in the middle of the night.

Come daylight Saturday morning, two CRCC paving crews began with two slipform pavers previously staged at the site. They used belt placers and dump trucks to place concrete over the dowel baskets placed in all of the transverse joints. The concrete was produced and delivered to the project from one of CRCC’s portable batch plants erected two miles from the project to serve several different projects. A high early mix was used to assure rapid strength. Saturday evening and into the night CRCC saw crews cut the transverse joints that were to be sealed with silicone sealant later in the week.

All went as planned to the accelerated schedule and by Monday morning the traveling public had the use of the full roadway as if nothing ever happened.

CRCC would like to thank the City of Lone Tree both for the opportunity to repair this long standing concrete pavement and the cooperative attitude that makes a project successful. 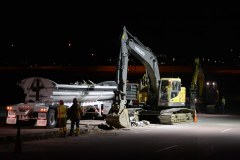 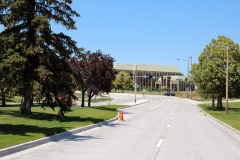 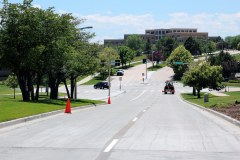 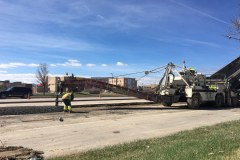 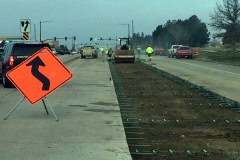